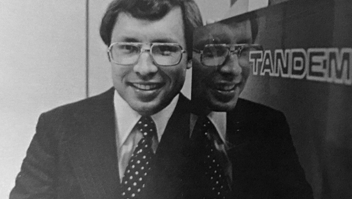 Tandem Computers: A culture that continues to thrive

On September 23, I attended the Tandem Computers Reunion at Blackberry Farms in Cupertino. I estimate there were over 100 people there, quite a few that traveled significant distance to be there to see old friends and talk about the best place they’ve ever worked.

The Tandem Story was the last chapter of my doctoral dissertation on the relationship between high-technology organizational culture and emotional intelligence. If you’re interested in the entire study, this is the full study: Herriford dissertation. But here’s the last chapter. Tandem’s culture was built on love and care for each other. It lives on!

The author offers these recommendations to leaders at every level of an organization. They are a means of gaining balance and building a strong, unique, and resonant organizational culture capable of weathering the turbulence that comes with the territory. Hewlett-Packard’s NonStop Enterprise Division, formerly Tandem Computers, epitomizes such an organization.

Vision and culture in a new organization begins with the founder (Schein, 1992). Jim Treybig, fresh out of business school and one of Hewlett-Packard’s (HP) first computer salesmen, believed that it was possible to build a computer that would not fail (Clemson, 2002). With Treybig’s support, an ad hoc team of field engineers built an approximation of the first fault tolerant transaction processing systems in the early 1970s. Treybig and most of this group left HP in 1974 to found Tandem Computers.

Treybig took a lot more than talent with him when he left HP. The HP Way was a belief in people, and he saw that it worked. Therefore, his vision was not only one of building a new technology but also building a unique cultural environment “that encouraged not stifled new ideas; that rewarded individual contributors not just managers; that understood the importance of family, of teamwork, of creativity and getting things done” (Clemson, 2002, p. 1). Treybig created an organizational philosophy to foster happy customers, happy workers, and happy shareholders and threw in beer busts every Friday afternoon and six week sabbaticals every four years.

Conversation and communication were paramount and served as the life energy of the culture. The organizational structure was designed around client industries. Cross-functional field teams sold, implemented, and supported Tandem products. The field teams were accountable for the bottom line and the customer relationship and could augment their configurations with corporate resources, if they made the case. At the Friday afternoon beer bust, at every location, system engineers and account executives, hardware engineers and finance managers, would have plenty to talk about over a beer or glass of wine. However, the discussions were usually balanced between work and outside interests. Family members were welcomed and were often in attendance. Musicians brought their instruments to entertain or lead sing-a-longs. People got to know each other.

Tandem was a prolific user of technology as a communications and productivity tool. An internal e-mail system was developed and implemented in the late 1970s, long before e-mail became a popular mode of communication. The system connected offices and people around the world. The design made it a very effective business tool and means of sharing information. The Tandem Television Network (TTN) was a satellite network through which training, major announcements, and important meetings were telecast, live, to every location that permitted a dish on the roof. Employees looked forward to First Friday, a fun, monthly broadcast with a serious purpose of providing a company update. But the talk show, a spoof hosted by a regional sales vice president using Buck Prophit as a pseudonym, was full of humor and even allowed Treybig to get into the act. In fact, TTN was also a team effort. The staff consisted of producers and technicians that drew upon the rest of the Tandem organization for cast and content, depending upon the project, for every broadcast.

The philosophy and practices described above were new to the industry and brought notoriety to Tandem as a “great place to work” (Clemson, 2002). Commitment, pride, engagement, and enthusiasm were evident throughout the organization. Posters of the Tandem Value System, Figure 3, were proudly displayed in offices and cubicles.

Tandem endured two technology cycles but began to struggle when the market moved toward open systems. The operating system running on Tandem servers was, and still is, proprietary – a necessity to accommodate the thousands of processors and tens of thousands of transactions per second required by stock exchanges, online services, and ATM networks. Tandem management became divided between staying with its strengths or jumping on the open bandwagon. The decision was to do both and Treybig’s wheel lost momentum.

While much of the original vision was manifest, Tandem missed some big plays, really big plays. Old friends and confidants moved on. Replacements were left to attend to their own interests. The beer busts fragmented. Coherent excitement became corporate, an oxymoronish concept. (Turner, 2002, p. 2).

In 1994, Treybig proposed a buyout to Compaq, but Compaq was not interested. He left Tandem in 1996, a year before Compaq changed its mind (Shankland, 2002). Now, with the May 2002 merger of Compaq and HP complete, Tandem has returned to its HP roots.

Maybe as a result of this serendipitous return to its origins, the Tandem community that Treybig sparked with a vision almost 3 decades ago is reconvening. The author worked for Tandem between 1984 and 1996. In June 2002, she received notice of the formation of a Tandem Alumni Group and an Internet Web site. Upon joining the group and the subsequent dialogue, she experienced the exciting, heart-felt contagion that underpinned the Tandem culture she remembered. Over 1900 people, including Treybig and many of the original founding team, have returned to share their memories of a company and culture like no other they have known. As would be expected from such a community, electronic communication is not enough – they all want to see and talk to each other, person-to-person. Plans for a reunion are underway.

Tandem began with a vision and philosophy that stirred emotions. Leadership was diffused, teams were truly empowered, and people respected and took interest in each other. For over 15 years, the organization performed well with a team-oriented structure, tenure was far longer than average, no one consistently worked 70-hour weeks, and technology was a tool and not a replacement for human contact. Tandem faltered when it looked away from its vision and succumbed to the game of what it believed were its competitors.

Nevertheless, a trace of the vision remained. Although Tandem lost ground to the commodity system providers, and it has been assimilated into Compaq, and now HP, what remains of the company looks much as it did in the early days. The technology still prevails as the premier fault tolerant transaction processing system available today. The list of core values still hangs on the walls of employees in HP’s NonStop Enterprise Division. They still “hoist the flag”, as Jack would say.

Tandem’s flag was, and apparently still is, a set of values that placed equal importance on self and others, individual and organization. The core values that underpinned the culture had self-oriented components that were balanced with other-oriented beliefs. Importance of the individual was tempered by respect for people and their diversity. Hard work was balanced by the belief in shared success. The focus on innovation and creativity was given a longer view with the expectation of responsible action and ownership. Open and effective communication was made possible by honesty and trust. Tandem was a success and had such a positive impact on the people who worked there because it recognized the importance of balanced values. Tandem and its leadership knew that to be effective as an organization, its self needed to truly engage with others in their desire to do the same.